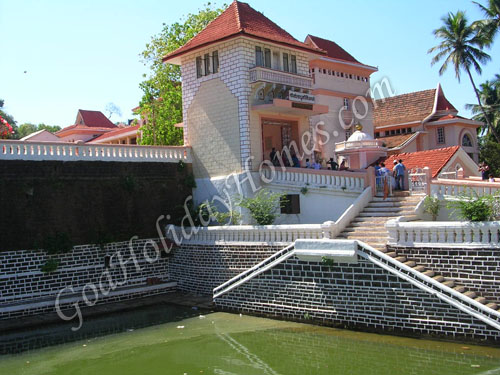 Most of the temples are built on the valleys but this temple is an exceptional, situated on the slope of the hillside giving the attractive view of white towers and red roofs shining along the greenery nature.

The temple was built by Shahurajit, Satara ruler in the year 1738; Shahurajit was the grandson of Great Shivaji, though he was names as Shivaji after the death of his grandfather Shivaji, he was popular as Shahu Raja. He had maintained his at Satara at south Pune. The building of temple was dedicated by Naro Ram, who was one of Shahu Raja's Ministers, as the contribution towards land of village in Ponda, Quela for its estate.

Wide spread steps takes you to the path of high gate along with the tank cut into the hillside on left. Nice range of offices, agarshalas and meeting rooms are built covering the huge courtyard, there are also branch of local banks providing required facilities to the large amount of pilgrims and visitors visiting here.

Its description goes this way, a big domed with elegant tiny hall, small doom little away, gleaming white six storeyed lamp tower impressing over the temple with terracotta colours, in entire concept this two towers are the only easily visible with domes, rest of the part is steeply pitched pyramids of red tiles. The big wooden wrath, the chariot of the goddess is light in black and gold, four storeys having windows each side, lamp tower in classic design and octagonal, symbolic horses on the front, great aravali tree standing attractive in courtyard having on its platform twin pointed arched shrines and a small image of Bhagavati (one of the fierce forms of shiva's consort).

The temple's main entrance hall has decorated wood doors coated with silver and so the main entrance hall path. On the entrance hall have the impressing art of Hanuman the Monkey God and faithful servant of Rama along with Garuda and the mount of Vishnu. Silver coated doors take you to beautifully designed Mandapa having the main effective features, four big pillars on each side; decorated ceiling with chandeliers, temples bells, in front of Shrine is exclusive three part silver screen. In the night the chandeliers form shining rays of light and falling on the marble every where gives classic collection of different design. A highly job done in silver of tiny Garbhagriha is special, a sitting image of Shantadurga on canopied alcove, the deity is flanked on one side by shiva and on the other by Vishnu, reminding her origins as the peace maker between these two gods and the circumstances in which she took her name.

This temple has made quite a few changes over the years, one among them is Lakshminarayana, whose shrine is in an extension to the right of the mandapa and there are others here as well.

The tale of Shantadurga is told like this Since Shiva and Parvati were reunited, Shiva decided to stay in Goa for meditation, so Parvati stelled little further close to the banks of Zuari River at Kelosi, now called Quelossim or Quela and here a temple was built for her but she was not worshipped as Parvati, but as Shantadurga. Shantadurga is joint of two terms Shanta Durga, means Peace and Violence. Durga is one of the dangerous aspect of Brahma, Shiva and Vishnu's power. In this form she took on many difficult tasks, on one occasion slaying a fierce demon called durga whose name she adopted. Once a fierce quarrel of Shiva and Vishnu took turn of violent battle and the whole universe was under treat. That time the third member Brahma in order to bring peace he send Durga and she settled their battle and thus peace was restored.

Goa has elected as Goddess of peace along with her favourite folk goddess Shanteri. No doubt this temple has maximum pilgrims in a year in Goa. This main temple is situated at Kolhapur, one of Maharashtra's state, 150 km away from Goa to the north.