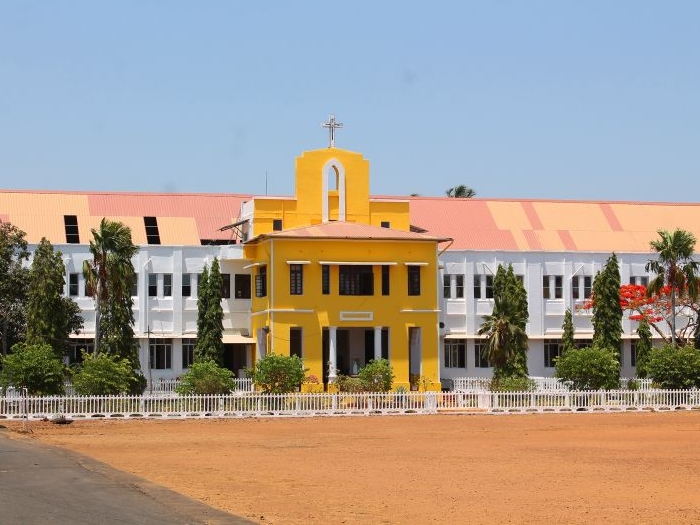 The idea to have a Minor Seminary was first mooted by the then Archbishop of Goa, D. Teotonio Vieira de Castro in 1934. It came as a response to the directives of the Church and also to the need that was occasioned by the marked increase in the number of external students in the Patriarchal Seminary of Rachol to around 660 in 1933. The idea having taken roots, in October 1934 some eminent personalities met under the leadership of the Archbishop to select an appropriate location After a lot of consultations, the Saligao-Pilerne plateau was decided upon by Engineers Aluisio Colaco and Jose Lourence, who had, in the meantime, already drawn up plans for the edifice. Moving forward, the Archbishop issued in 1936 an appeal that was also signed by some 78 eminent Catholics and in the first year a sum of Rs.100, 000.00 was collected. The Archbishop, D. Teotonio, laid the foundation stone on 8th December, 1937, in the distinguished presence of the Civil and Ecclesiastical Authorities and a large number of people. On this auspicious occasion, Pope Pius XI, through the Cardinal Secretary of State, His Eminence Cardinal Pacelli, sent a personally signed letter conveying His congratulations to the Archbishop and praying that the Seminary would soon begin its work of priestly formation so as to carry on the glorious traditions, both ecclesial and missionary, of the Archdiocese of Goa. The construction work, as such, began only in December 1938, under the supervision of Rev. Fr. Paulo Arcanjo de Menezes. However, the difficult circumstances arising due to World War II, specially the accentuated cost of materials, and, to make the matters worse, the death of Archbishop D. Teotonio, in Rome in April 1940, brought the work to a grinding halt. After much persuasion, the Government helped with a large donation. Other donations followed, with which the work of the building could be partially completed, but just enough to meet the needs of the students. The building was blessed on 6th December, 1952, by Cardinal D. Manuel GonÓalves Cerejeira, Patriarch of Lisbon, who was the Papal legate for the centenary celebrations of the death of St. Francis Xavier. Thus the new Seminary was born. Fr. Altino Ribeiro de Santana was appointed the first Rector of the newly opened Seminary. The construction work, however, continued and the north wing of the building was added in the early 1960s in keeping with the original plans. Though the edifice is by no means complete as per the drawn up plans, it is a magnificent sprawling modern building commanding a breath taking view of the exotic beauty of Goa from its heights. It is what the visionary Archbishop dreamt and the Church of Goa is proud of. Dedicated to Our Lady of the Rosary of Fatima, it has for its motto 'quÌ sursum sunt, sapite' ( taste and see what is above) which has been its guiding principle.