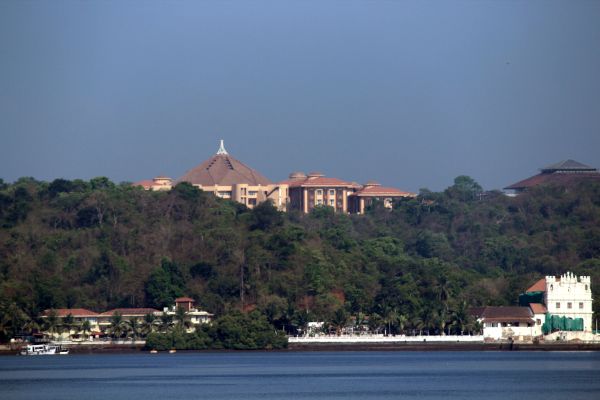 The Rock of France is known for a high peak in Spain, because band of Frenchmen took refuge there during the Moorish invasion. When French monk got divine guidance that a statue of Our Lady had been left buried on its summit, in order to recover the statue, the monk built a chapel over there.

Our Lady of the Rock of France became famous for the miracles performed for those who made the pilgrimage. After the monk's death, the chapel was replaced, by the Dominicans, by a great church.

Devotees took pilgrimage here, especially from Portugal. A gilder from Lisbon made nine images of Our Lady under different invocations as a vow of thanks for being spared at the battle of El Ksar el Kebir, against the Moors. He dedicated one to Our Lady of Penha de Franca. He also built a chapel in Lisbon which was completed in 1598. The statue was soon famed for answering pleads, especially in removing plagues and scourges.

In 1599, a plague attacked the fleet of ships traveling to India. The written vow was made by captain and crew; if they were saved they would make a mass pilgrimage to the Lisbon church. The plague vanished, thus it became essential practice for many Portuguese ships to carry the Penha de Franca image of Our Lady, being given the title as 'The Protector of Ships'. For its use, it was then in Goa in the year 1626 a church was built down on the banks of the Mandovi, especially by seamen, this dedication was chosen. In the 17th century this was a rocky outcrop, now less evident has taken place beneath the silting up. Later a tiny chapel in the village of Ponolem on the Island of Colvale, further to the north in the Mapusa River, was also honoured in this way, not knowing that they were to join a privileged few.

In 1754, Pope Clement decreed that no other church should be so dedicated. In order to preserve the eminence of the church in Lisbon, As such only two churches were there in Spain, one was in Madeira and one in the Azores, besides those in Goa - so this dedication remains rare and interesting.

Similarity to famous Franciscan church, that of St. Francis of Assisi in Old Goa, this old church is distinguished by the upper section of its tower being octagonal just about visible as part of the wide view from the high standing porch. The road moves from the hillside onto the area of river flats created by the silting process.

The marvelous Goan countryside blossom as the Mandovi swims gently with the island of Chorao opposite, the view of the church you see is St. Bartholomew. Paddy, coconut and moored canoes line the river banks. Evergreen glossy leaves of cashew and dense tangled bark covers the slopes above. The air is filled with heady perfume when towards the end of year pink and white blossom appears. Towards the end of February as the first nuts and fruits begin to ripen, the people gathers to pick and crush the apples for their juice, along with the high value nuts. Distilling takes place in the multitude of tiny country stills that cover the area and soon the year's rich harvest of clear soft urraak and fenny reaches the pots. In the end they are racing to beat the monsoon. Coconut fenny is also made in this area, but it is caju that reigns supreme.